A Volatile Month – With New Highs and Big Plunges

A Volatile Month – With New Highs and Big Plunges 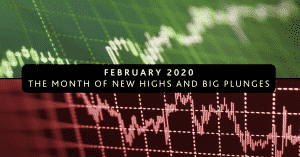 February brought “new highs” and “big plunges” in the financial markets. The COVID_19 has added another layer of uncertainty in the markets and is threatening to disrupt an already fragile global economy.

Investors are forced to exercise increased caution towards the end of the month due to the mistrust over the virus case count following two changes in methodology within one month and the wider spread across borders.

According to the WHO, The “World must prepare for pandemic”. As more cities in certain countries go into quarantine, investors fret a bigger impact of the virus risks on the global economy.

Coronavirus is being viewed as the tip of the iceberg and the last straw.

It was a classic reaction where investors sought safety with haven assets like the Japanese Yen, US Dollar and the Gold.

The Yen normally find buyers when there are panic and uncertainties in the markets. We saw the currency periodically picked up haven demands when coronavirus fears escalated but the momentum was weaker compared other haven assets.

Given that Japan’s economy contracted the most in five years, the haven status of the Japanese Yen was compromised.

The US dollar remains the King of forex backed by stronger economic fundamentals, a less-dovish central bank and its haven status. Nearly all the major currencies were weaker against the greenback. 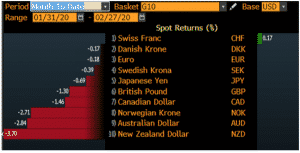 The US dollar index which tracks the performance of the greenback against a basket of currencies rose to new highs in February before retreating to levels around the 2019 highs.

The Index is composed of six component currencies namely: the Euro, Japanese Yen, British Pound, Canadian dollar, Swedish Krona and Swiss franc. The Euro which has the biggest weightings in the index improved tremendously following upbeat German’s IFO surveys which pulled the index from 2020 highs.

The retreat is mostly driven by the upside movement of the shared currency. In other words, markets’ sentiment towards the greenback has not fundamentally changed. The dollar remains preferred compared to other major currencies.

A fragile risk environment pushed the gold price to multi-year highs. The yellow metal broke key levels to the upside and traded just below $1,700. Since the beginning of the year, the XAUUSD pair has remained in elevated levels around the $1,550 and $1,600 level. However, gold traders pushed the pair significantly higher as the virus risks sparked fears of economic fallout.

At such high levels, gold was in the RSI overbought territory and a correction was highly expected. As of writing, the pair has consolidated around $1,650. Investors will likely continue to monitor the updates on the virus for fresh trading impetus:

Coronavirus is certainly not the only headwinds, but it is definitely boosting the short-term outlook for gold. We expect any retracement will likely be limited as investors are hedging against poor fundamentals and the long-term headwinds.

Are COVID_19 fears alone causing such a massive sell-off in the global stock markets?

Coronavirus is an evolving risk which is acting as the tip of the iceberg triggering a massive sell-off in an overheated market. Risk sentiment remains fragile and the virus is probably the excuse for the long-awaited pullback.

Major equity indices fell dramatically and US benchmarks are poised to end the month into correction territory due to a fall of more than 10% in the last few days.

A correction to the stock market bull run was long overdue. 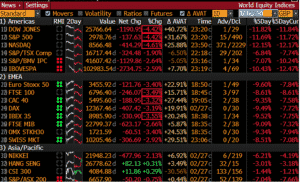 Key highlights of the month that shows the nervousness in the markets are:

The Big Plunge in the stock market makes the Buy-the-Dip strategy seems attractive at first glance. However, price action in the markets is expected to remain volatile until there are more positive developments on the virus. Investors are struggling to assess the risks of supply chain disruptions and the economic impact on the global economy.

Uncertainties are roaring loud and clear in the financial markets even though any effects of such an epidemic is normally expected to be temporary. When the stock market was soaring, it was hard to find convincing reasons to sell. Market participants are now on pause and taking the opportunity to be reflective about the struggling economy fueled by central bankers’ constant intervention.

A stronger-than-expected earnings season is being overshadowed by warnings of the virus on future sales and profits. The WHO has not yet declared the spread as a global pandemic, but companies fed by a global supply chain or within certain industries have already warned that their earnings will take a hit.

The record low yields in the bond market is a reminder of how investors are pricing the risks. As stocks tanked globally, the 10-year Treasury note yield fell to an all-time low. US government bonds are generally the safest assets sought by investors during times of economic distress.

COVID-19 risks, and a myriad of other concerns like the Fed’s policies, and the uncertainties around the 2020 US election are denting risk sentiment.

In an already sluggish global economy which are battling several headwinds and low levels of interest rates, investors are monitoring economic data to gauge the “forecasted” recovery. The United States is standing out compared to its peers as its economy is more resilient and its central bank is also less-dovish.

The impact of the virus on the world’s economy will depend on how widely the virus spreads across borders. The US economy is strong and might have more room to absorb the temporary effect of the virus risks. This month, we saw central banks like the ECB seeking for a more fiscal boost as there is little room for central bankers to shore their economy.

Stepping into March, we expect the markets to remain volatile driven mostly by the developments of the virus. The decision of the outbreak by the WHO will be heavily monitored. Investors will look for support that the spread of the virus is contained while reassessing the uncertainties and the actions from central banks to stem the economic impact.

Disclaimer: Articles and videos from GO Markets analysts are based on their independent analysis. Views expressed are of their own and of a ‘general’ nature. Advice (if any) are not based on the reader’s personal objectives, financial situation or needs.  Readers should, therefore, consider how appropriate the advice (if any) is to their objectives, financial situation and needs, before acting on the advice.

GO Markets was established in Australia in 2006 as a provider of online CFD trading services. For over a decade, we have positioned ourselves as a firmly trusted and leading global regulated CFD provider. Traders can access more than 250 tradeable CFD instruments including Forex, Shares, Indices and Commodities.

Follow us and keep up to date with the latest market news and analysis.